Inspired by the PJ game, the Liberated Pixel Cup, the Indie Brawl and other collaboration game art projects, I (Hapiel) had the long standing wish to organize a free to use pixel game art set.

In April 2013 I found myself having a lot of free time, and asked some friends for advice, and to participate. DawnBringer immediately published his 32DB palette for us which gave the project a head start. While experimenting with the style we also created the first versions of the traveler character and the jungle tiles. Looking back at those we came a loong way! 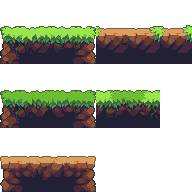 The project grew fast, and besides the threads at PixelJoint and Pixelation all of the files were hosted on a private wiki, in which we invested a lot of time. Sadly, over holidays I did not update the wiki software, and my server got overrun by malicious spam bots. Because of this, and my lack of time, I tried to let the project die or finish. However, people clearly wanted it to continue! With a new core group of Damian, Gabriel and me we have been updating sets and looking for better ways to organize the project.

In 2014, we’ve shared most assets in the library of OpenGameArts, where they have been downloaded by thousands of people.

In early 2015 we’ve managed to move most assets from a Creative Commons license into the Public Domain.

In 2016 we’ve renamed ourselves from Open Pixel Platformer to Open Pixel Project, being more inclusive to possible future additions.

In 2017, Gabriel flew cross continental and the three of us finally met in person, to rekindle this fire. This website is one of the results of that gathering!